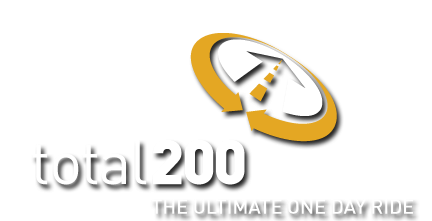 Buzz about Total 200
It was a great bike experience!!!!!
Guillermo
2007
Fabulous Sponsors

Throughout the years we've heard a lot of great things about Total 200 and especially the wonderful support. These are just some of them.

Best things about Total 200? Course... and volunteers. Awesome course re-design. Loved it... and hated it at the same time. Great views... tough riding. Volunteers were INCREDIBLE. Thanks! Can't wait until next year! (Did I just say that out loud?)
Tom Collins
2011
A big call out of thanks to the entire T200 team. You put on an epic ride today.
Allon Shiff
2011
Eric, you rock, dude! That was another very well-organized ride and thanks for changing the second half! Much better!
Al Navidi
2011
I completed the 200k, 125 mile ride. Thanks for everything. The ride was supported wonderfully. I had a great time.Â  You did an excellent job.
Trudy Hinish
2011
The ride was great. One of the best organized I've ever done. If you change nothing, it'll be great. Anyway, it was the dog's danglers. Thanks a lot.
Paul Kerr
2011
Thank you ALL for such a challenging and very fun adventure! I really really really enjoyed the ride and the company so much. I just can't find the words to let you know how much I appreciated all the planning, time, effort and work from so many peeps that went into making the day such a successful one. What an awesome experience. Thank you for everything
Emily Armstrong
2008, 2009, 2010
The ride was unbelievable from every perspective! The volunteers were more like superheroes coming to our aid. The riders were great, the peanut butter sandwiches and enduralyte were lifesavers, and the logistical organization of the ride could not have been better.
Keith French
2008
The most difficultest awesomest thing I've ever done, in spandex or otherwise. Thanks to all the volunteers! Great job! A++
Aaron Reese
2010
I'm always pleased and impressed with this ride every time I've done it as a rider or volunteer. It's fun and exhausting to do both, but it's also so rewarding to volunteer for a change. Such a fun, low-key event.
Emily Jacobs
2005, 2006, 2009
Keep doing whatever you're doing. Works for me!
Al Navidi
2007, 2008, 2009, 2010
The best organized and supported one-day cycling event I've every done.
Dario Tirado
2008
Its a pretty epic ride, especially given the camaraderie that is built from an experience of that magnitude.
Paul DelVecchio
2006
It was a great bike experience!!!!!
Guillermo
2007
Had a wonderful time!
Kristin Barnes
2010
It was one of the best rides I have ever been on!
Kevin Pierson
2009
A great experience that does not have a local equivalent.
Adam Sidel
2010
Excellent...will do it again next year.
Henrik Elschner Pedersen
2008, 2009, 2010
Total 200 is a day I will never forget and I will cherish every mile. Thank you!
Erica Rubenstein
2010
THE BEST 1-day organized ride I have ever done, which every year provides both a physical and mental challenge such that the sense of satisfaction and accomplishment at the end leaves me coming back for more year after year.
Emily Armstrong
2008, 2009, 2010
A well organized experience that I will never forget.
Aaron Gardner
2010
A great day's ride, an unforgettable experience.
Jeff Horowitz
2010
Great experience. Glad I finally attempted it even though I didn't finish it. Aid stations were stocked w/ great stuff and broke up the ride nicely. Volunteers went above and beyond. They were amazing.
Sean Ward
2010
A ride to challenge the mind, body and your friends.
James Kaneshiro
2009
Thanks again to the most outstanding group of volunteers. Every stop was like being seated at a restaurant!! Y'all ROCK!!!
Glenn Daniels
2011
Yesterday was epic, great ride on a tough tough day, a hats off to all the volunteers, especially the mechanics who tried to fix the spoke I broke.
Davis Mcpherson
2012
Epic ride! Thank you to all the volunteers for coming out!
Tool Jampathom
2012
I had a great time supporting! Thanks athletes, you were awesome and inspiring.
Olwen Huxley
2012 Volunteer
You guys did an amazing job, thanks for all the support throughout the course! A really great day!
Natasha Calderwood
2012